The civil war in El Salvador: An exciting search for traces

When was the civil war in El Salvador?

The Civil War in El Salvador: A short summary

Trace 3: Talk to the people! 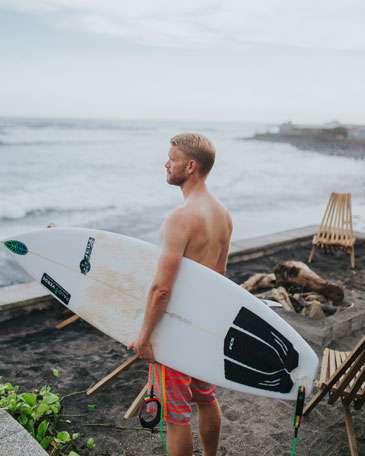 The Civil War in El Salvador: A search for Traces

If you’re interested in history and if you want to understand a little bit more of what El Salvador is about, you should read this post.

Even better would be to search for the traces of the civil war in El Salvador by yourself. I want tell you a bit more about these places in El Salvador.

I went to different places in El Salvador and discovered different traces that I didn’t expect! Maybe you can find some inspiration for your next trip to El Salvador.

When was the civil war in El Salvador?

The civil war in El Salvador started in 1980 and ended in 1992. It’s one of the saddest chapters in Salvadoran history. More than 75.000 people were killed, and it affects the society in this little country until today. 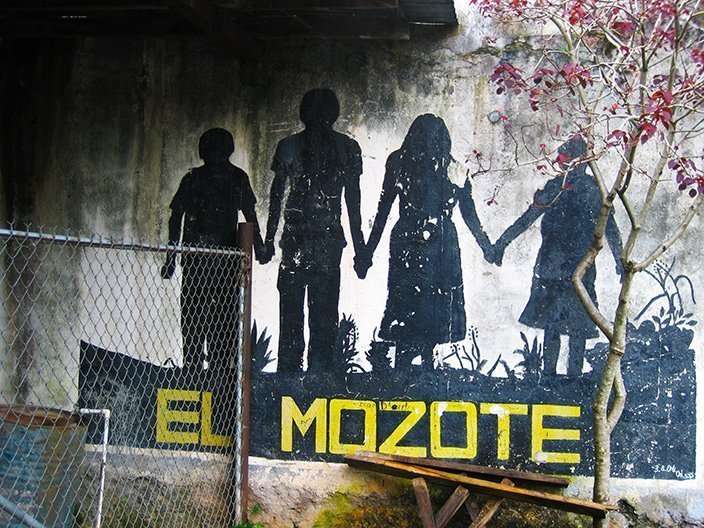 The civil war in El Salvador: a short summary

There’ re way more detailed texts about the civil war in El Salvador. But I will try to give you a quick overview.

As in many other countries in the world, El Salvador has (almost) always been a country that has very few rich people and lots of people who live in poverty. That hasn’t changed significantly until today, but the cold war in the 1980s made it even worse, and the conflict escalated.

The civil war in El Salvador was a conflict between the military-led junta government of El Salvador and the Farabundo Martí National Liberation Front (FMLN), a left-wing group.

Death squads, the recruitment of child soldiers, an unknown number of people disappeared, and other human rights violations were some of the horrific consequences. The war finally ended with the Peace Accords in 1992.

Click here to get some more ideas about the civil war in El Salvador.

A gunman shot him in 1980 during a mass, which shocked many people in El Salvador. “Monsenior Romero” was (and still is) very famous and popular because he always spoke against repression and violations of fundamental human rights. His death was the start of the civil war in El Salvador. 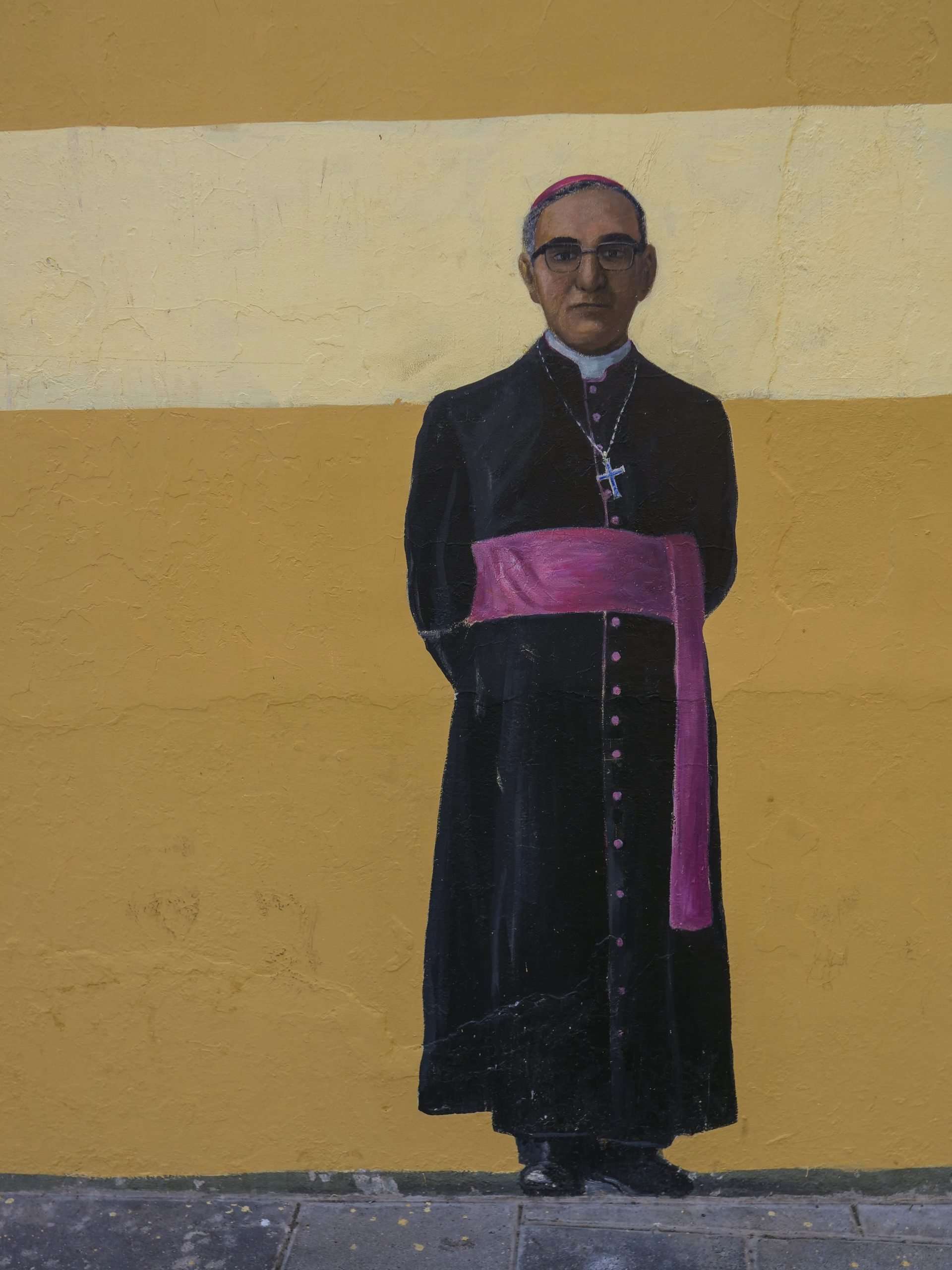 Until today, you will see his picture on many souvenirs and murals all over the country. And if you came by airplane to El Salvador: guess, what’s the official name of the airport in El Salvador?

Romero is a national (and international) saint that hasn’t lost any of his aura until today.

I strongly recommend to read more about the civil war and visit the cathedral where his tomb is. The place itself is not that beautiful, but the atmosphere is really impressive.

There’re also some fascinating documents in the same room underneath the cathedral telling you moving facts about Monsenior Romero. 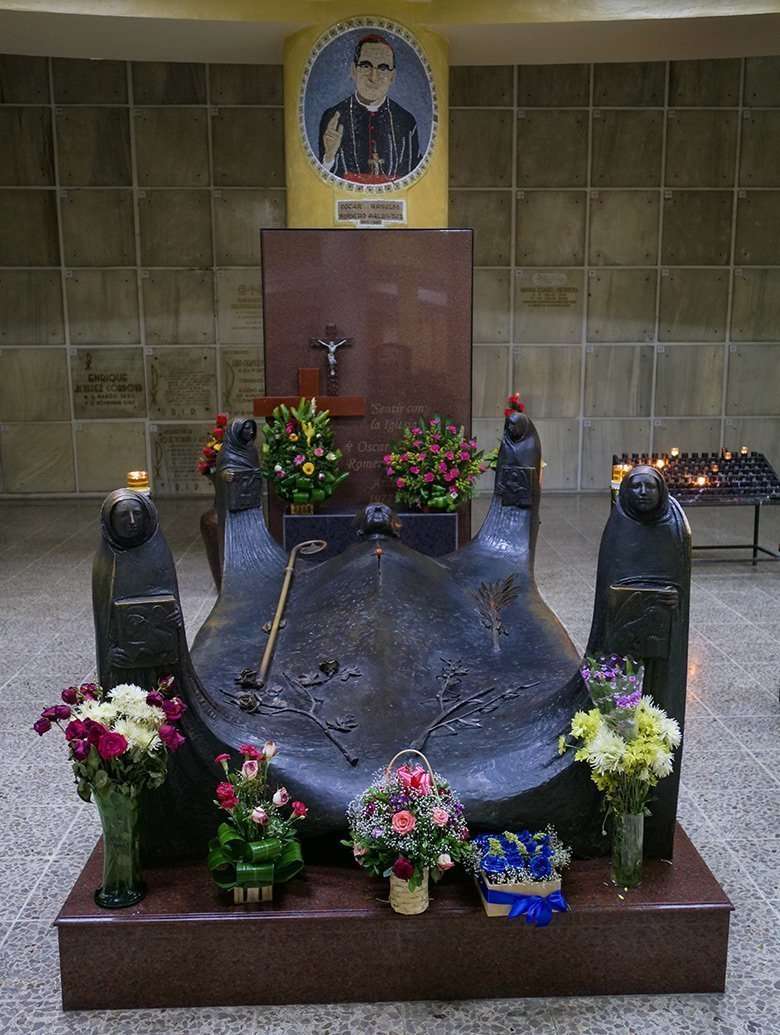 Book a guided tour or go there by yourself if your Spanish is good enough. We can recommend several reliable and professional tour operators.

On your way back you should visit the “Museo de la Palabara de Ia Imagen” (Museum of Word and Picture). It has several interesting exhibitions, and also one about Monsenior Romero.

The Civil war in El Salvador – Trace 2:
Go to Perquín

Perquín is a small town in the department of Morazán. During the civil war in El Salvador, it was one of the base camps of the left guerillas.

The “Museo de la Revolución” (Museum of Revolution) is an exciting place to visit. It offers some astounding original photographies, pictures, weapons and even a crashed helicopter from that time.

Besides that, the landscape is completely different there from what you might know from the beaches in El Salvador. 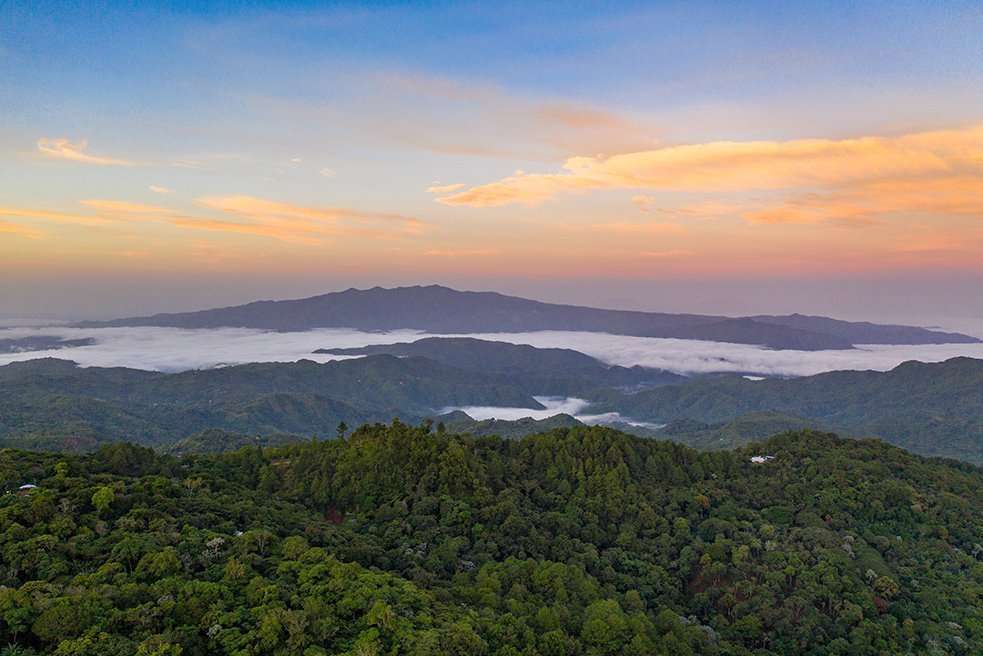 But one of the most exciting things you can do is talk to an Ex-Guerilla that sometimes offers tours there, unfortunately mainly in Spanish. It’s probably beneficial to bring someone how can translate for you if you don’t speak Spanish because you don’t want to miss what he has to say. 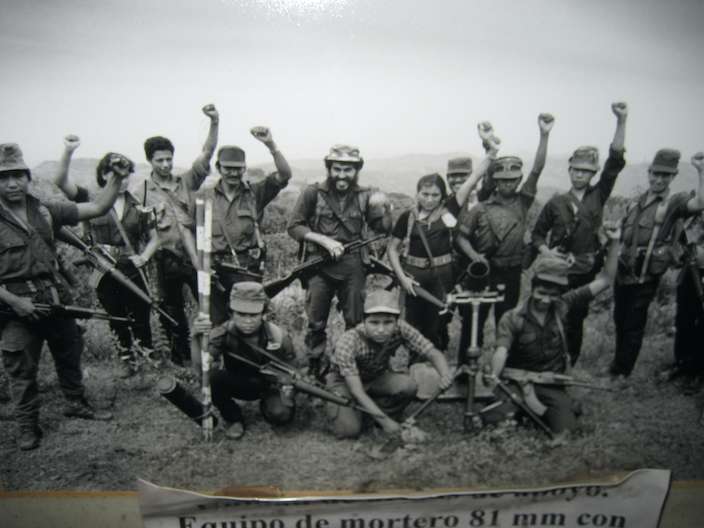 The museum is enlightening in many ways. Not only because of all the facts you learn. There’s also some evidence that people here still have a lot to learn from the civil war in El Salvador. Unfortunately, there’s no significant public support for this museum. It’s all privately funded. 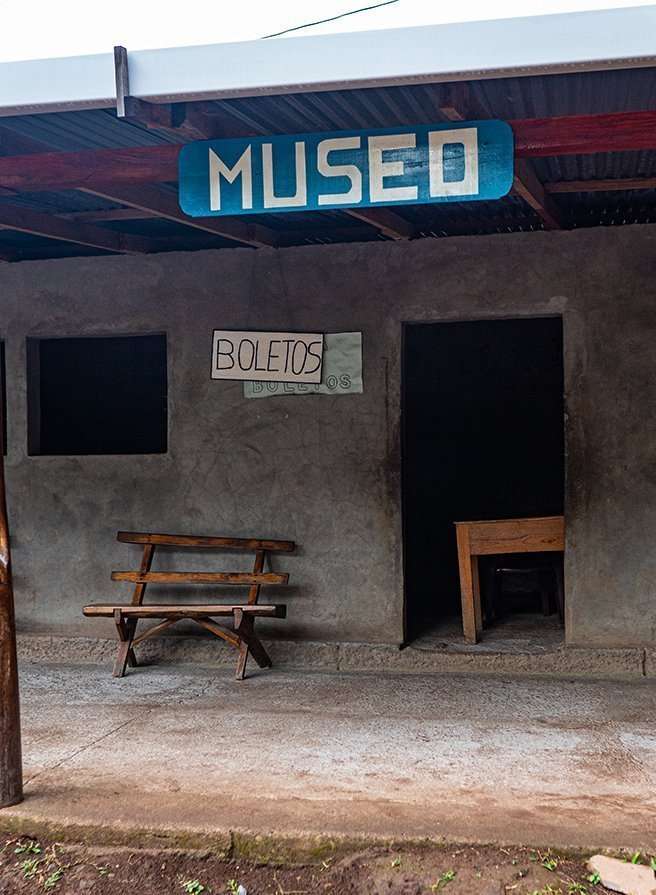 I asked a guide about the museum’s purpose. He answered: “We want to demonstrate the negative consequences of the civil war in El Salvador. We should learn from it. We don’t want it to come back!”.

I went around the corner and saw the  Salvadoran tourists taking photos with weapons in their hands, playing guerilla. That’s pretty hard to understand for a german who comes from a country with a cruel history of war. 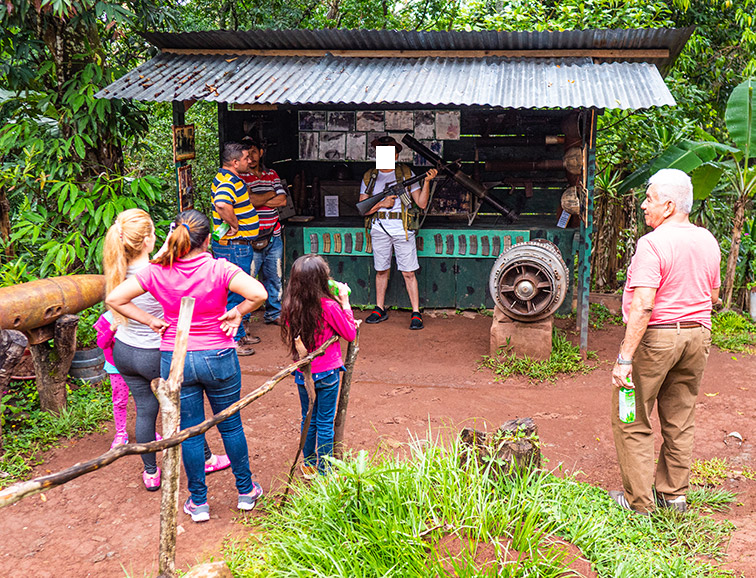 Being in Perquin, you’re very close to El Mozote. Mozote was the place of one of the cruelest massacres during the civil war in El Salvador.

In 1981, more than 800 civilians were killed by a right-wing death squadron. You can visit a memorial and talk to a local tour guide who will tell you some more details about this sad place.

In 2019 (!) President of El Salvador, Nayib Bukele, ordered the removal of Colonel Domingo Monterrosa’s name from some barracks in El Salvador. Monterrosa is blamed for ordering the El Mozote massacre.

Read this article to learn more about “El Mozote”. 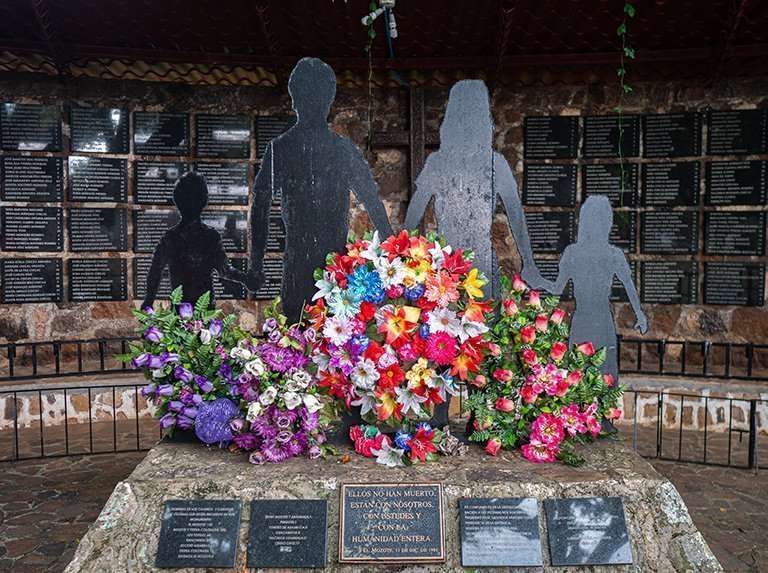 If you want to go to Perquín, you should rent a car or book a guided tour. It’s at least a two-day tour and a five-hour drive one way.

Perquin itself doesn’t have much to offer. I can recommend the Hostel Perquin Real as a budget option to stay. Morazán is also an excellent place for hiking by the way.

Well, that isn’t really a travel tip. But I always think it’s worth asking kindly about information about the civil war in El Salvador.

I think people here don’t really like to talk about it, which is normal. For some people, the wounds of war still seem to be fresh. But as a foreigner, you might get a bonus and some interesting insights about it.

Showing interest in Salvadoran history is nothing bad, and we, as SAY ZONTE!, think that there can be a mutual learning effect. 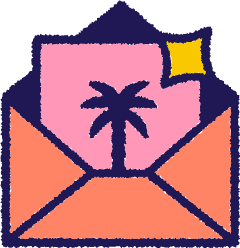